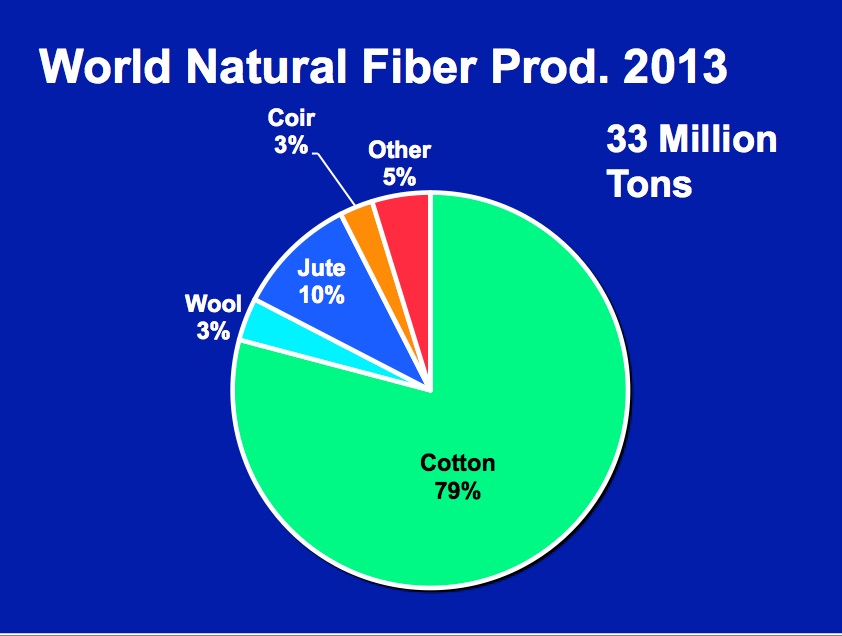 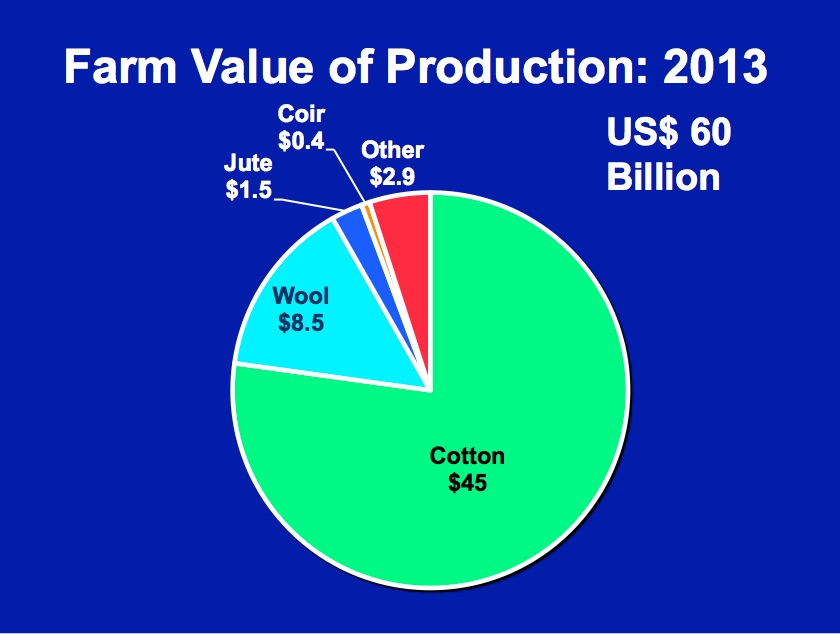 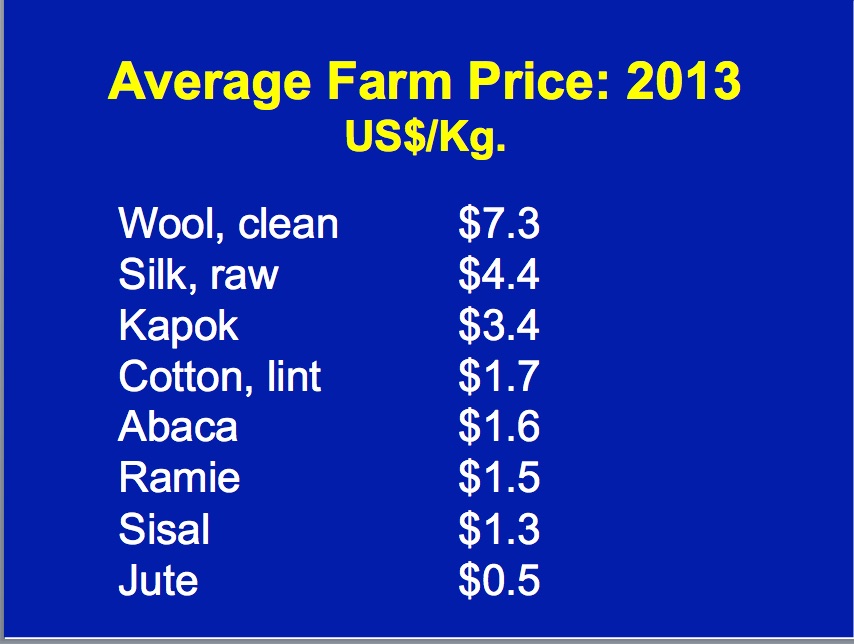 It is difficult to estimate employment in the agricultural segments of natural fiber value chains because most production occurs in developing countries with weak systems of data collection, most producers are small holders and most labor is hired informally and seasonally, and because many households go in and out of fiber production from one season to the next, making it difficult to know who and how many are employed in any one year. Nevertheless, a reasonable estimate of total employment in natural fiber industries, including family labor, hired labor and employment in industries providing services to agriculture, and including both full time year round employment and part time or seasonal employment is around 60 million households or 300 million people in total, or about 4% of the world’s population. 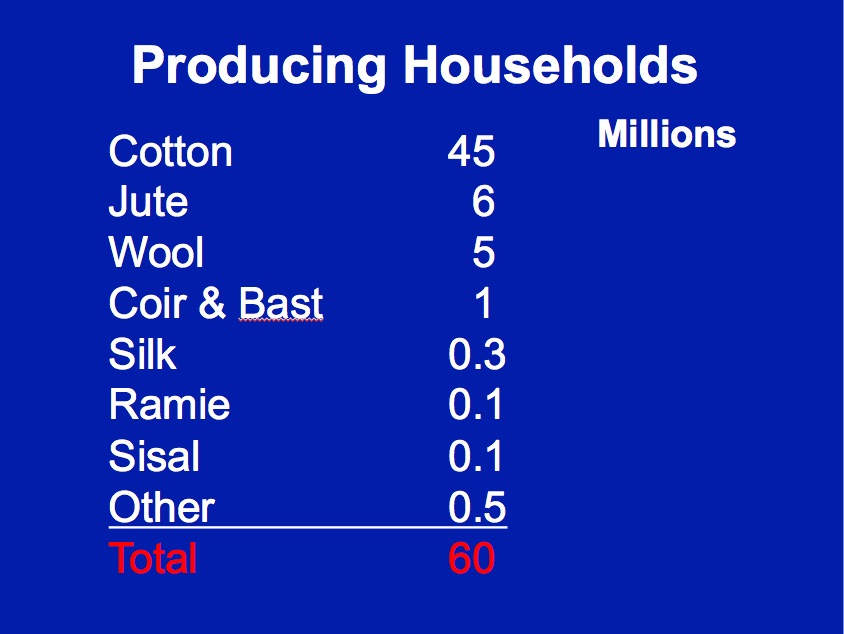 Global wool production was 1.2 million tons, clean basis, in 2013. Apparel accounts for 51% of wool use. Australia is the leading producer of wool, which is mostly from Merino sheep. China is the second largest producer, and New Zealand is the third largest and the largest producer of crossbred wool.

The value of world wool production in 2013 is estimated at US$8-9 billion. The wool industry produces wool on several million small-hold and commercial farms worldwide and employs millions of people in wool production, harvesting and throughout its many processing stages.

The structure of wool production varies enormously from country to country. For example, the American sheep industry (ASI), where sheep are raised primarily for meat rather than wool, has 79,500 sheep producers through the United States producing about 7,230 tons of wool, or about 90 kilograms clean basis per producer. On the other hand, Australian Wool Innovation reports that in Australia (where wool is the primary product) 25,000 wool growers produced 270,610 tons of clean wool in 2013, or about 10.8 tons per producer. The British Wool Marketing Board has 46,000 registered wool producers accounting for 23,400 tons of wool, or about 500 kilograms per producer.

Assuming that productivity per producer is the same in New Zealand and South Africa as in Australia, that productivity in European countries is similar to that in the UK, and that wool production per producer in other countries where meat is the primary output is similar to that in the United States, there might be about 5 million households producing wool around the world.

Sisal derives its name from a small port in the Yucatan peninsula of Mexico through which the earliest supplies of agave fibres, locally known as Henequen, were exported.

Mexico had practically a monopoly of agave fibre production, mainly for cordage, until the early 1900s. However, demand stimulated cultivation elsewhere during the twentieth century, and plantations appeared in many parts of the world based on different species of agave that had been transplanted from its original home. Agave sisalana (sisal) proved the most successful of these species.

Cultivation of agave sisalana developed into a major industry in East Africa, particularly in Tanzania and Kenya, prior to World War Two. Hybrid varieties of the plant were developed that gave extended production life and higher fibre content to the leaves. During the post Second World War years, rapid growth occurred in Brazil, and Brazil is the largest producer and exporter today, followed by China. Sisal is produced by smallholders in Brazil, while sisal in other countries is commercially produced on medium to large sized plantations.

Sisal is unique among fibre crops in that it is a perennial, and the first harvest comes only three years after planting. Sisal is labor intensive, and employment in sisal production is estimated at one person per ton, or about 300,000 persons in between 50,000 and 100,000 households.

Over many years the main products made from sisal were binder twines and cordage used mainly in baling agricultural products. However, demand for sisal baler twine has declined over the last 30 years due to competition from twine made from polypropylene. Nowadays, apart from the ongoing production of agricultural twines and cordage, sisal is increasingly used in weaving yarns for natural carpets, the cores of elevator sisal ropes and as buffing/polishing cloths for a wide range of metal surfaces, such as stainless steel cutlery and car body parts.

The end uses of sisal fibre have diversified in recent years, and it is now used in composite materials, as a replacement for glass fibres and the strengthening of plastics. It is also being used in various components in the automobile industry and in commercial aircraft, in the geotextiles sector for land reclamation schemes and the stabilization of slopes in road construction. There are applications in plaster reinforcement in the construction of domestic property in certain parts of the world, and sisal is also used as padding for mattresses and domestic furniture, and in the handicraft sector for handbags, placemats, animal figures and other products.

Fibrous Flax is cultivated mainly in Europe in France, Belgium, Netherlands, Poland, and Lithuania, as well as in Ukraine, Russia, Belarus, Egypt and China. European production of flax fibers ex scutching mills (a process of separating flax fibers from the woody parts of the plant) was 160,000 metric tons in 2013, including 115,000 tons of long fibers and 45,000 tons of short fibers. European production accounted for approximately 80% of world production, which is estimated at about 200,000 tons.

Approximately 10,000 companies in 14 European Union countries are involved in the linen industry to produce finished fabrics, from planting and harvesting flax, to scutchers, to spinners, weavers, knitters, finishers and traders. These companies are gathered in the European Confederation of Flax and Hemp (CELC).

Most growers in Europe devote about 11 hectares to flax each year, and flax is usually less than 15% of total area on each farm. Flax is grown without irrigation, and all commercial varieties are developed conventionally. There are around 7,000 flax growers in Europe alone, and worldwide there are probably between 8,000 and 10,000 producers.

Flax fibers show very good mechanical properties (especially stiffness and absorption of sound and vibrations) and low density, which predisposes them for use as reinforcement of composites, giving the latter a more eco-friendly character. The markets for flax fibre are 90% textiles – fashion, home & lifestyle, and 10% for new composite goods such as sports equipment and materials for the automotive industry.

About 100,000 hectares of Hemp were grown worldwide in 2014, including 40,000 hectares in China, 25,000 in Canada and 17,000 in Europe. (Production in Canada is for seeds only.) Assuming that average farm size is similar to flax, about 3,000 households are involved in commercial hemp production.

Hemp fibres are mainly used for specialty pulp & paper, insulation material and for bio-composites in automotive applications. As of 2014, 55% of hemp was still used in specialty pulp & paper, mostly supplied by French producers. Insulation material, together with other non-woven applications, like mulch fleeces, which are used in gardens and agriculture, water cress growing fleeces, and mats for farrowing pigs, account together for 25% of use. Biocomposites account for 20% of hemp applications.

The only really established biocomposite market is compression moulding in automotive interior applications. Hemp biocomposites account for 7,500 tons, including 3,700 tons of hemp fibre and 3,800 tons of other fibers. Automotive biocomposites for interior applications are a growing market and are used for door panels/inserts, trunk liners, spare wheel covers, parcel trays, headliners, A-B-C columns and much more. Chinese hemp fiber is mainly processed into textiles and exported around the world.

Cotton is grown commercially in about 80 countries on approximately 2.5% of the world’s arable land; making is one of the most significant of all cash crops. Cotton is also a highly-traded commodity with about 150 countries involved in exports or imports of lint. Cotton connects people to markets because it is storable, durable, has a high ratio of value to cost of transportation and because it can be grown in arid regions. Therefore, cotton is grown mostly in land locked countries and interior regions of continents.

The biggest challenges facing natural fiber industries, including the cotton industry, are economic in nature caused by competition with polyester and other oil-based fibers. Natural fibers accounted for all fiber use a century ago, and as late as the 1980s, cotton alone accounted for 50% of world apparel fiber use. However, as of 2013, cotton’s share of world fiber consumption was less than 30%, and all natural fibers together accounted for just over one-third of world fiber use. Synthetic filament (manmade continuous fibers, like fishing line) and synthetic staple fibers (manmade fibers that have been cut into shorter segments) accounted for 58% of total fiber use in 2013, and cellulosic fiber (manmade fibers made from cellulose, usually extracted from wood) accounted for 6% of the total. The loss of market share to polyester, and especially to polyester filament, is a threat to the survival of the cotton industry and the entire staple fiber spinning industrial chain.

Jute and kenaf (kenaf and jute are different plants but have similar fiber characteristics) are cultivated almost exclusively in developing countries of East Asia and in some parts of Latin America. Bangladesh and India accounted for 97% of world production during 2013/14, with most production occurring in the Ganges Delta shared by the two countries. Until the late 1990s, world production of jute fluctuated between 3 million and 3.7 million tons, with the notable exception of a record crop of over 6.0 million tons in 1985. Between 1998 and 2000, world production exhibited a marked decline to an average level of 2.6 million tons because of competition with polypropylene. However, world jute and Kenaf production reached 3.3 million tons in 2013/14, and the farm value of production was about $1.5 billion.

Jute is processed mainly in the producing countries themselves and is used for the manufacturing of traditional products such as hessian cloth, food grade bags, carpet backing and other floor covering. Because of a national law requiring the use of jute in packaging material, India is the largest jute consumer. Diversified jute products, such as geo-textiles and composites are manufactured in relatively small quantities. Jute cultivation and processing is labor-intensive and therefore provides a livelihood and is an important source of food security for many farmers and their families in Asia.

Jute is the major cash crop for over 3 million farm households in Bangladesh (Bangladesh Jute Textile Mills Corporation). Assuming productivity is the same in India and other producing countries, 6 to 7 million households worldwide, meaning around 30 million people, are involved in jute cultivation. When the full value chain, from agriculture, to marketing, transportation, manufacturing and trading are considered, 25 million people in Bangladesh alone, one-fifth of the population are dependent on jute.

World silk production amounts to less than 200,000 tons of filament, but with an average farm value of more than $4 per kilogram, the total value is about $700 million. Silk is extraordinarily labor intensive because of the need to tend the silk worms, harvest the cocoons and unwind silk filament from cocoons; an estimated 800,000 people worldwide are involved in production of silk filament fiber.

India is the second largest producer of silk in the world after China. Silk is produced year round in Thailand. Most production is after the rice harvest in the southern and northeastern parts of the country.

World production of abaca, ramie, which is often blended with cotton in apparel fabrics, and sisal, an industrial fiber, totaled about 500,000 tons in 2013. World Abaca production had a value of about $100 million, Ramie about $200 million and Sisal about $400 million. Together, about one million people are involved in the production of these crops.

Brown coir fibre is obtained from mature coconuts, while white coir fibre, which is finer, is extracted from immature green coconuts. Coir fibre is elastic enough to twist without breaking and it holds a curl as though permanently waved. Twisted or curled fibre is used in mattresses and bristles that are twisted to obtain a “spring/curling” effect. Total coir production was more than 900,000 tons worth about $400 million in 2013, and employment in the coir industry totals several million people.

The authors gratefully acknowledge the support of the Discover Natural Fibre Initiative (DNFI) and its members and the Food and Agriculture Organization of the Untied Nations (FAO) in gathering the data used in this report.